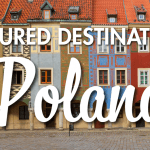 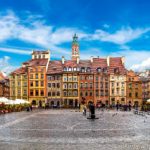 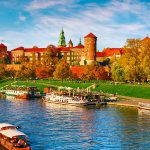 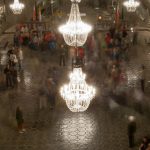 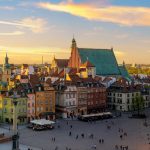 Poland may not be on the top of your client’s “want to visit list,” but it should be. This gem of a country is seeing an upward trend of visitors that have slowly discovered why its UNESCO World Heritage sites, stellar food, intricate history, and natural features are something truly spectacular to see.

Poland’s political capital offers visitors the chance to explore the country’s rich history. Old Town is a UNESCO World Heritage site that was nearly leveled in World War II, and painstakingly rebuilt to echo its original grandeur and style. In the center of the Old Town square rests the city’s legendary mermaid statue. As the symbol on Warsaw’s coat of arms, the mermaid is poised with a sword and shield to protect its city.

Lazienki Park offers residents and visitors alike a place to explore the neo-classical architecture that survives amongst the gardens. The Palace on the Isle is the most famous of its structures, originally serving as the royal bath house. Among other notable monuments are the Myslewicki Palace, the Old and New Orangeries, and the guard houses. The park also features a monument to the Polish composer Frederic Chopin, whose prolific musical compositions are a source of Polish pride.

The memorials to the Warsaw Ghetto and Warsaw Uprisings stand as testaments to the struggles and sorrows that World War II brought to the city. Since its opening on July 31, 2004, the Warsaw Uprising Museum has sought to document and display the story of the Polish Underground State, which led the Uprising from August 1, 1944 – October 2, 1944. It also commemorates the Warsaw Ghetto and the uprising that took place inside, though a more extensive museum on this segment of history is planned to open in 2023. 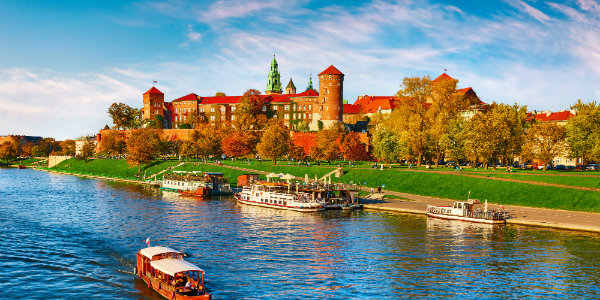 A few hours ride away, Krakow, Poland’s cultural and intellectual center offer visitors a chance to dive deeper into the country’s past. Krakow’s popularity as a merchant stop in the 12th century led to Mongols raids in the 13th century, forcing the Polish people to rebuild. City planners took this opportunity to lay out the city on a nearly perfect grid plan with wider streets than many of Europe’s other cities. Today, this planning makes Krakow an easy city for visitors to navigate and explore.

Many of Krakow’s structures survived the World Wars, and today they welcome visitors from all over the world. Wawel Hill is home to several important sites including a castle, cathedral, and the National Museum. Beyond Wawel Hill, top destinations in the city include St. Mary’s Basilica, a medieval church that unveils its intricate altarpiece each day at noon and the Main Market Square, which remains the home to many local artisans. In the evenings, Krakow’s popular jazz clubs provide sightseers with a relaxing, intimate option for soaking up the local culture. 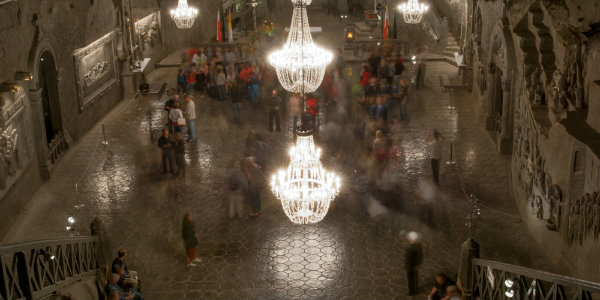 Outside of the City

Just outside of Krakow’s city limits, travelers can visit the Wieliczka Salt Mine. The Polish people began mining salt from this location in the 13th century and continued to do so until 2007, making it one of the world’s longest-running salt mines. Today it is an official Polish Historic monument not only for its importance to the region’s history and economy but for its statues and chapels carved from the rock salt. Visitors can tour the mine, learn about the industry, and walk through the chandelier-laden St. Kinga’s Chapel.

Another notable landmark lies about an hour’s ride from Krakow: the Auschwitz concentration camp. Many travelers make the journey from the city to visit this solemn Holocaust site. From the notorious gate to the sobering museum, those who make the pilgrimage to witness these camps are given the chance to learn from history and honor the memory of its prisoners. 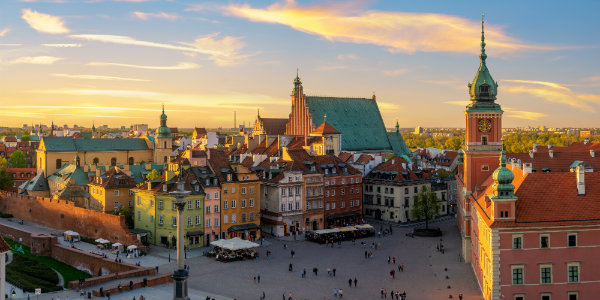 Both Warsaw and Krakow are home to international airports, making it a convenient destination for your clients. Both destinations are offered through United Vacations. For clients that are looking to experience Poland with a structured tour or guide, the Globus family of brands offers a variety of options. Check out our Supplier by Destination Guide in the Agent Portal to find more.

Are you looking to start your own travel business to help others visit destinations around the world? KHM Travel Group is a host travel agency which supports a network of over 4,000 travel agents. To learn more about how you can become an independent travel agent, fill out the form to the right or give us a call at 1-888-611-1220.