Not in New Orleans? Celebrate Mardi Gras in These Cities Across the U.S. 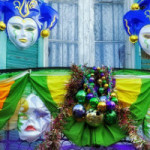 Even if you can’t make it to the Big Easy, plenty of cities around the country celebrate Fat Tuesday. They may not be as raucous or hedonistic as the festivities found on Bourbon Street, but they do all embrace the indulgent spirit of Mardi Gras.

Mobile, Alabama: This southern town is thought to have hosted the first official Mardi Gras parade in the country in 1830. The multi-cultural celebration continues each year in Mobile with several balls and parades hosted by secret mystic societies.

Minneapolis, Minnesota: Sub-zero temperatures don’t stop these Northerners from living it up. Revelers head downtown in Carnival regalia for Mardi Pub Crawl, a beer-fueled jaunt through some of the city’s most popular bars and clubs.

Dallas, Texas: Swap the andouille sausage for a bratwurst at Dallas’s German take on Fat Tuesday festivities. At Fasching Fest, a “König” and “Königin” are crowned the years’ Karnival royalty and a local deli provides plenty of activities, live-music and German fare.

Orlando, Florida: Universal Studios estimates 1.8 million are tossed in the air during it’s epic Mardi Gras parade, purported to be the largest outside of New Orleans. During the festivities, parkgoers  get a taste of authentic Cajun cuisine and zydeco music in the French Quarter Courtyard.

How are you going to celebrate Mardi Gras?