Rick’s Insights from the Carnival Executive Partner Advisory Board Meeting 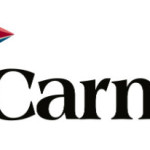 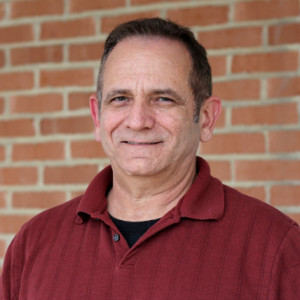 Earlier this year, KHM Travel Group’s President and CEO Rick Zimmerman was named to Carnival Cruise Line’s Executive Partner Advisory Board. This month the advisory board, along with members of the cruise lines senior leadership and sales team, gathered in New York City for the board’s annual meeting.

Carnival gave the 12 board members the VIP treatment over the course of three days. They stayed at the Andaz Hotel in midtown for the first few nights, and then were whisked away for an evening on the Vista, Carnival’s new mega-ship.

The trip kicked off with a private dinner the first evening, and then an early start with meetings the next day. The discussion during the meetings focused on trade decisions and strategies impacting the travel and cruise industries. 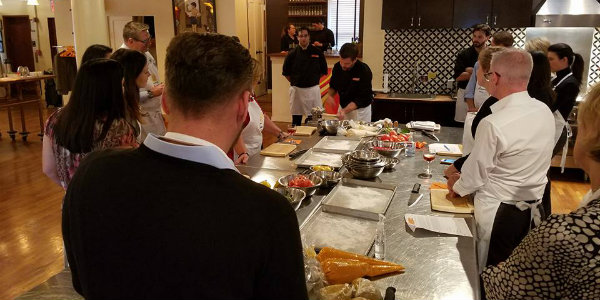 The board members preparing lunch as a team!

As our agents might have seen, Rick also posted in our Agents-Only group before his trip, asking what thoughts or concerns they’d like him to share with Carnival. Throughout the meeting, he was able to communicate much of that feedback to the cruise line.

“Carnival is trying to give us as much knowledge as they get from us,” said Rick. “They shared the good things, like increases in numbers, and they also got to voice their concerns.”

One issue that Rick wants to draw agents’ attention to is an issue with prepaid gratuities. Whenever prepaid gratuities are part of a guest’s purchase, there is an inordinate number of people lining up at the guest services desk to get their gratuities back.

This is a common occurrence not only on Carnival, but on Holland America and Princess lines, which are both part of Carnival Corporation LLC.

“This is having a bigger impact, in that Carnival is not able to pay their team members what they’d like to,” Rick said. “These are people who are away from their families for long periods of time, and are trying to make the experience memorable for guests.”

Rick also lists non-commissionable fees as a popular talking point. He stresses to agents that diminishing these fees is an industry-wide project, and a lot of them are carried out by ports-of-call. As the champion for making cruises affordable for all, Carnival is especially working hard to cut down costs. 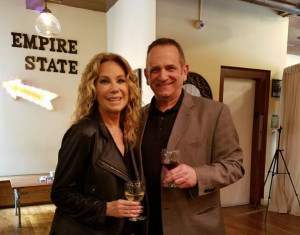 Rick had a few celebrity encounters during his trip, including meeting Kathy Lee Gifford!

It wasn’t all business though; Carnival had a few big surprises lined up for the board members. During lunch the first day, Kathy Lee Gifford popped in to speak to the group, and even sang a song! As a former Carnival spokesperson, she was very engaging and energetic!

The celebrity encounters continued at dinner that evening, which was prepared by star chef and Food Network star Alex Guarnaschelli. They all also received a signed copy of her cookbook.

One action-packed day followed another. Rick was up early the next morning and taken to an undisclosed location, which turned out to be a helicopter launch pad! On a cool, clear morning during rush hour, the board members got a true bird’s-eye view of New York City on a helicopter tour!

“We use the word ‘amazing’ to describe a lot of things,” said Rick. “But this was truly amazing.” 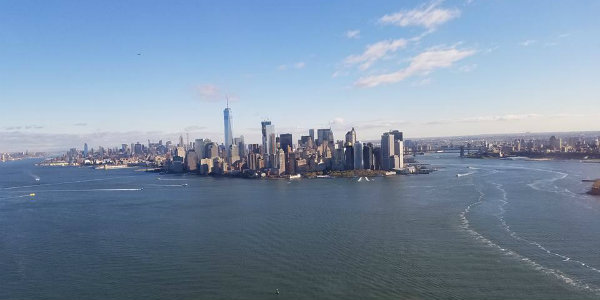 A simply stunning view of Manhattan.

That afternoon, they boarded the Carnival Vista. After a top-notch lunch at JiJi Asian Kitchen, everyone got front-row seats to the Carrie Underwood concert on-board…and also got to meet the country superstar afterwards! 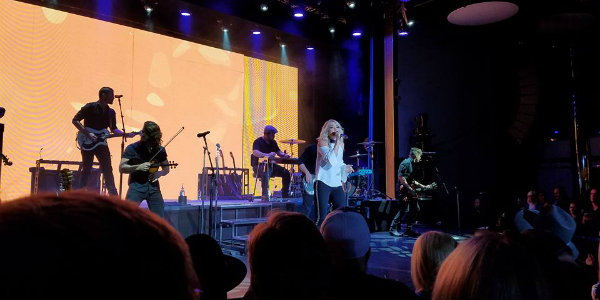 Up close and personal with American Idol winner Carrie Underwood

Meeting Mickey Arison, chairman and former CEO of Carnival Corporation and owner of the Miami Heat, was another highlight for Rick. It was Arison’s mission to establish a cruise line that made it possible for every American to go on a cruise. Obviously Arison is a very busy man, and Rick was impressed by the fact that he took time to speak to every board member during dinner.

Opportunities like Rick’s meeting with the Carnival Executive Partner Advisory Board are valuable for KHM Travel Agents because they allow us, as a host agency, to advocate and provide feedback directly to the decision makers at our Preferred Suppliers on our agents’ behalf.

Thank you to Rick for sharing his thoughts and insights from this unique trip!

Stay updated on KHM Travel news by subscribing to our blog! If you’re interested in learning more about our host agency and starting your own home-based travel agency, fill out the form on the right and we’ll send you our free information packet.