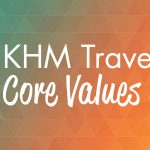 We live in a world in which words are constantly flying at us from every possible source: texts, emails, social media, news alerts. It’s a whirlwind of words.

What holds importance, especially in challenging times, are the words that we collectively give meaning to. Social distancing was not part of anyone’s vocabulary six months ago, and now the phrase literally defines our daily interactions.

In the same way, our Core Values are the words that define our daily interactions at KHM Travel Group. They are what we use to frame and give meaning to our conversations and our decisions. Our Core Values video series celebrates these 13 words through the voices of our team members.

Learn more about why this project was so important to our team from the people who brought it together, our video team of Ashley and Robby. After that, watch the first Core Values series video on People First!

Why did we decide to make an entire series out of our Core Values?

Ashley: About a year ago, we sat down as a team and talked about what was important for us to share about KHM Travel. We knew we wanted to share more about who we are, not just what we do. We wanted to show the people behind KHM Travel, and let them speak for themselves about what KHM Travel means to them. We chose to do this through our Core Values.

Robby: The idea actually came from one of our Core Values: Gratitude. I remember thinking to myself during a brainstorming session how thankful I was to have found an organization that doesn’t only have a great set of values, but that constantly encourages its team to employ those values at work and in their everyday lives. It isn’t that we’re all perfect and living out our Core Values impeccably, but that we’ve all committed to the process of learning, sharing, and growth that comes from implementing them whenever we can. It’s really quite a large mindfulness exercise when you think about it.

From behind the camera, how did you approach this project?

Robby: Getting people to talk about our Core Values was in no way difficult. Even those who’ve never been recorded before were enthusiastic to talk about not just their favorite core value, but any one of them. It just goes to show how ubiquitous these principles have become in the lives of our team members.

Ashley: I’m always excited to get into the studio and work with different talent, but this time it was different. No scripts, no teleprompters, no cue cards. Just us, our team, and a few simple questions: Number one, How do KHM Travel’s Core Values impact you and the company as a whole? Number two, tell us about a Core Value and what it means to you? The KHM Travel spin on it was asking people to pick a random Core Value from a fishbowl and tell us what came to their mind. This was so much fun!

What surprised you as you were creating the Core Values series?

Ashley: As people started talking about why they love KHM Travel, I was honestly blown away. For some people, it’s the work itself that drives their passion, and Excellence was the Core Value that meant the most to them. For others, it was the people that made the difference.

Everyone’s responses were a little different, but one thing remained consistent: we are a family and we are there for each other. We don’t pick and choose what Core Values we follow. We need all of them to keep us accountable to the type of people we want to be.

Why do you think it was important for us to share our Core Values this way?

Robby: Ultimately, we’re not the only organization with good core values. I hope that by showing the commitment of everyone in KHM Travel to implement our values in an ever-present way, we might inspire others to think differently about these principles and how they can be applied at work, home, and out in the world.

We are proud to share our first Core Values video below. To get alerts when new videos are released in the future, subscribe to our YouTube channel.

We would love to hear from you and answer any questions you may have about starting your travel agent career. To find out more about KHM Travel Group, fill out the form to the right or give us a call at 1-888-611-1220.