Carnival Reveals Vista Will Have Onboard Brewery 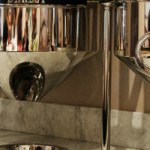 At the end of 2014, craft beer sales surpassed sales of Budweiser in the U.S. This fact has not been lost on cruise lines, as they continue to add more specialty brews to their ships’ beverage lists.

Last Thursday, Carnival took the craft beer craze a step further with their announcement that the highly-anticipated, 4,000-passenger Vista would include a brewpub. It will be the first North American liner to brew beer onboard, and the second worldwide; Germany’s Aida Cruises is the only other line that boasts working breweries onboard.

While dining, guests at RedFrog Pub will be able to catch glimpses of the holding and fermentation tanks. Carnival also plans on installing a grist mill on a lower deck, so that they can process all of the grains on-ship as well.

Three freshly-made beers are expected to be on draft at the brewpub, and through new tabletop taps that allow guests to pour their own pints. Tours and tastings are also part of the plan at RedFrog.

Corona and Bud Light continue to be Carnival’s best sellers, according to Allen, but people are “not necessarily drinking the same beer back to back to back.”