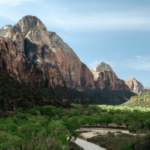 The United States government established the National Park Service in 1916. It was the first organization of its kind in the world, formed to preserve and protect our landmarks and natural treasures from an increasingly commercialized world. Visitors spend over one billion hours every year enjoying recreational visits to the country’s 400+ national parks.

In addition to the usual nature-lovers and history buffs, the COVID-19 pandemic has prompted more travelers to investigate outdoor, U.S.-based getaways. Let’s take a look at some of America’s most popular playgrounds!

Established in 1872, the world’s first national park remains the jewel of the NPS. Visitors are drawn to 2.2 million acres of majestic landscape, volcanic wonders, and diverse wildlife. Nicknamed the American Serengeti, Yellowstone boasts the largest concentration of mammals in the continental US, including bears, bison, moose, and wolves.

One of the nation’s busiest parks, Great Smoky Mountains draws nearly 10 million visitors a year, thanks in part to its scenic highway offering spectacular viewws of the park’s namesake mountains. Outdoorsy types will be enchanted by the 800 miles of hilly hiking trails traversing one of the world’s most diverse deciduous forests.

Even from the best vantage points, only a fraction of this vast, 277-mile long gorge is visible. But that doesn’t stop more than 5 million people from making the pilgrimage to the Grand Canyon during a typical year. Avoid the crowds by venturing along one of the park’s many trails, or by driving to the cooler, greener North Rim.

Although only one road passes through the park’s 6 million acres, there are many ways to experience the stunning slopes of Denali. No cars are allowed beyond mile 15 of the 92-mile long road, but you can backpack, bike, or utilize the park’s bus system to get closer to the summit of North America’s tallest peak. The most intrepid visitors can plan a packrafting adventure through Denali’s remote river system.

This park’s name derives from the 2,000 ethereal, naturally-formed arches found within its 50,000-acre grounds. More than a million people visit annually, however the arches may not be around for future generations to enjoy. Beyond natural forces affecting each structure, every visitor has an impact on the desert’s highly fragile ecosystem. Due to the arid climate, footsteps left here may be visible for decades. Those that venture should minimize their impact by staying on the designated trails.

The sea meets picturesque mountains at Acadia. Despite being one of the smaller national parks, its pristine lakes and ragged shoreline make it a popular summertime destination for New Englanders. The 20-mile long Park Loop Road offers a breathtaking introduction to the park’s rolling forests and lush valleys.

Are you inspired to visit one of America’s national parks? Call your travel agent about planning an unforgettable trip.

If you’d like to learn about becoming a travel agent, KHM Travel Group is here to help! Fill out the form on the right or call 888.611.1220 ext 2200 to receive more information.